Sunset and evening star,
And one clear call for me!
And may there be no moaning of the bar,
When I put out to sea,

But such a tide as moving seems asleep,
Too full for sound and foam,
When that which drew from out the boundless deep
Turns again home.

Twilight and evening bell,
And after that the dark!
And may there be no sadness of farewell,
When I embark;

For tho’ from out our bourne of Time and Place
The flood may bear me far,
I hope to see my Pilot face to face
When I have crost the bar.

It is with deep sadness that the Falmouth Branch, The Royal Naval Association, reports that Shipmate Alan Polley Crossed The Bar on 1st April 2020.
Alan was a long standing Falmouth Branch Member and a former Branch Treasurer, Alan contributed hugely to the success of the Branch throughout his life and even when declining health and the inability to travel prevented him from attending meetings he remained a strong supporter of the Branch.
His latter years were spent living with his family in a specially converted ground floor annex. As Branch Chairman I greatly enjoyed my visits out to see him, he was always great fun to be with, he retained his sense of humour and his outlook on life.
I shall miss Alan and our thoughts at this time must go to Lillian and Alans family

It is with deep sadness that the Falmouth Branch, The Royal Naval Association, reports that Shipmate John Bryant Tighe Low Crossed The Bar on 17 March 2020. John was a long standing Shipmate of the Falmouth Branch, his easy charm, good humour and willingness to help everybody meant he was a well liked and respected Shipmate.
In these extraordinary times Johns funeral service was held behind ‘closed doors’ at Penmount Crematorium on Thursday 26 March 2020, sadly only four were permitted to attend but many of his shipmates joined the service via the video link.
When life returns to normal the Falmouth Branch will hold a Memorial for our Shipmate and send him on his way in true Naval style.

It is with great sadness that the Falmouth Branch informs you that Shipmate Valerie Pitts has “Crossed the Bar”.
Valerie had been in poor health for some time and was recently hospitalised in Penzance and latterly Falmouth, true to to form Valerie wanted no fuss and no visitors

Valerie was our longest serving Branch Member and although Valerie guarded her privacy she was funny, witty and outspoken on the things that were important to her. The Branch last spoke with Valerie when she rang concerned that her annual subscription had yet to be paid, she was more concerned that Shipmates would think her ‘slacking’ than with her health issues.

Valerie was never afraid to speak her mind and when required offered sound advice, a stalwart of the RNA the Branch remembers her missing very few meetings and functions before ill health intervened. 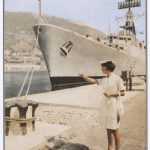 It is with great sadness that I have to inform you of the Crossing of  the Bar of long time member of Chard RNA and wife of long serving past president  S/m Mr Jim ‘Nobby’ Noble.
Edna took a fall at home and was being treated in Musgrove Hospital and as a result of her injuries sustained in the fall unfortunately crossed the bar on 23.05. 2018 made worst in that it was also her 86th birthday.
A memorial service will be held in her memory on Wednesday 13th June 2018 at the Methodist Church, Fore Street, Chard at 11.00hrs.
RIP Edna

We have received a request from the family of Frederick William Arthur Chapman born 21st September 1940. via Veterans Bereavement Support and Central Office asking if anyone could attend his funeral. Frederick served for 24 years in the Royal Navy including times on Submarines, he was awarded the LS and GC medal in 1973, and the Queens Silver Jubilee Medal 1977

The funeral will be held on Wednesday 6th June at 1400hrs  at St Margarets Church, Northam. DEVON

He served on the following ships:

It is with great sadness that It is reported the Crossing of the Bar of Shipmate Jack Bevis 93yrs a former Royal Marine and one of the last survivors of the D Day landings for which he received the French Legion de Honneur in 2017. He was one of the longest serving members of the Chard branch along with his wife Gwendoline who unfortunately passed away about two years ago.
Although in later life he kept himself to himself, whenever any other member visited him it was always Tot Time and he was always willing to attend any great social event although less after the passing of Gwen.
He spent a short time with an illness in Musgrove Park Hospital from where he crossed the bar on 2nd March 2018, he leaves a son Keith, having lost his daughter and wife previously.
Although Jack wishing for a quiet funeral, his son Keith thank the branch for all the help given to Jack and requested the Branch standard be presented and Union Flag to be draped over the coffin, this was carried out with Sm Malcolm Day bearing the standard in respect to Jack a further four members of the branch attended the ceremony.

It is with sadness we report that Area Life Vice President Tony Milliner JP, Crossed the Bar Monday 29th of January at 13.40.
ALVP Tony has been a strong supporter of Area 4 Serving on the Area Committee as Assistant Secretary and a Branch Standard Bearer he also served on the Reunion Committee.

The Funeral took place at Gloucester Crematorium. Coney Hill Road, Gloucester. GL4 4PA. On Friday 16th February 2018 at 1500. There were 8 standards (4 RNA and 4 RBL) plus 9 other supporters from Portland, Ferndown, Street, Frome, Bristol and Liskeard. There was a good contingent from the Royal British Legion in the Gloucester area. Nice full eulogy by the Celebrant on behalf of family. A tribute by Shipmate David White, President, South West Area, Royal Naval Association on Tony’s RNA life also by Andrew Cooper, Chairman, Thornbury and District Royal British Legion.

Like many former sailors, some time after leaving the Service, Tony joined the Royal Naval Association.  He first came to prominence when the previously commissioned Silverton Exeter branch was renamed simply Exeter branch in the 1990s.

Since then Tony became the branch Delegate to Area meetings and Annual Conferences.  For many years he was the branch Standard Bearer, latterly renowned for his consistent presence lining the route at Royal Wootton Bassett for the repatriation of military casualties from overseas conflicts.
He also held the posts of branch Chairman, Welfare Officer and Secretary.  Even after moving home to the Gloucester area he regularly made the return trip along the M5 for the monthly meetings.

Much of the liaison work between the branch and the destroyer HMS Exeter was down to Tony’s efforts.  He maintained the link and arranged numerous visits to the ship.
Someone who enjoyed being busy, Tony was a useful member of the Area Committee, of which he had been the Assistant Area Secretary.  Always a good socialiser Tony was also a most fitting member of the Annual Reunion Committee.

Rewarded for his diligent work on behalf of his branch and the Area, he was made an Area Life Vice President.  Richly deserved.His wise council and good humour will be missed  –  but valued  –  by all who knew him.

The Service sheet is available in .pdf format here

Shipmate Derek Haskins Crossed the Bar at 08.10 Monday 20th November in Cork Street Nursing Home.
He will be remembered as a quiet gentle man who enjoyed his model making and supported Frome branch for many years. As Standard Bearer he represented the Frome branch and the Royal Naval Association throughout Area 4 and further afield.
Although he had been unwell for quite some time he continued to attend meetings until the last few months.
He will be missed by all of us as well as many people in Frome that were fortunate enough to know him and our thoughts go to Joy at this time.

The funeral will take place at the Mendip Crematorium, Old Wells Road, Croscombe, Wells BA5 3RR on Tuesday 12th December. The service will be conducted by the Rev. Graham Owen commencing at 10.00. Joy has requested that the coffin be draped with the Union flag and that the branch Standard be in attendance.

After the service the wake will be held at Phoenix House Communal Room Frome, Dommetts Lane, Frome, BA11 4JT, and all Standards will be welcome.

Joy has requested family flowers only and donations to the Royal Naval Association Frome.

Geoff passed away after an 18 month fight with Cancer on 5th November 2017.  You may remember him from the days when we lived in Bideford and he was the Treasurer of the Torridgeside RNA when it was decommissioned in 2012.  He was also made a Lifelong Member of the RNA by Torridgeside members for the work he did with them at that time, and attended many of the regional Area 4 meetings in the South West.

A funeral service will be held on Sunday 10th December 2017 at 1200 at the Higher Ground Meadow Natural Burial site near Corscombe and afterwards we plan a get together and refreshments at Maiden Newton Village Hall when we hope friends past and present may join us.
It would be really nice if perhaps the RNA (maybe from a local branch to us here?) could be represented at his funeral.

It is with deep regret that I have to notify you of the Crossing The Bar of two of our Branch Presidents. Shipmate Dennis Morris of the Christchurch Branch  on the 5th October very unexpected, and Margaret Sallis this morning 8th October.

The Funeral of Shipmate Margaret Sallis  will take place at 12.00 at Holy Trinity Church Frome and will be conducted by our Chaplain the
Reverend Graham Owen. A private service will be held at Semington Crematorium and a wake will follow at Frome Rugby Club, Gypsy Lane, Frome.
BA11 2NA . Please notify Shipmate Mike King mikeking42@blueyonder.co.uk if you will be attending

The Funeral of Shipmate Dennis Morris is on 30th October at Bournemouth Crematorium at 14:30 ( North Cemetery Strouden Road BH8 9HX)
There will be family flowers only. Donations are invited for Macmillan Caring Locally (Christchurch). Donations can be made via Miller Bros;
The Standards of Christchurch RNA and The Royal British Legion Christchurch Branch will be paraded and S/M’s will form a guard of honour.
S/M’s are invited to Pokesdown & Southbourne ex-Servicemen’s club 21 Stamford Rd, Bournemouth BH6 5DR After the crematorium service

Both will very much missed for all the work that they have done in their respective Branches. Margaret has been a very active member of the Area for as long as I can remember.

May they depart in peace and rise in Glory